-- China's green endeavors have spanned various sectors, including construction, transport and the manufacturing of new-energy vehicles.

BEIJING, Nov. 2 (Xinhua) -- China, the world's biggest producer and consumer of energy, is rapidly reducing its energy consumption intensity, as higher energy efficiency will support the country's transition to a modern green economy.

China's energy intensity -- energy consumption per unit of GDP -- decreased 28.7 percent from 2011 to 2020, one of the fastest reductions in the world, according to a white paper released Wednesday documenting the country's progress in mitigating climate change.

From 2016 to 2020, on average, China fueled an annual expansion in its economy of 5.7 percent, but the growth of its energy consumption only stood at 2.8 percent per year. During that time, the amount of energy saved in the country accounted for about half of the total in the world.

Under the goals of peaking its carbon dioxide emissions before 2030 and achieving carbon neutrality before 2060, China is accelerating the transformation to a clean and low-carbon energy consumption structure. 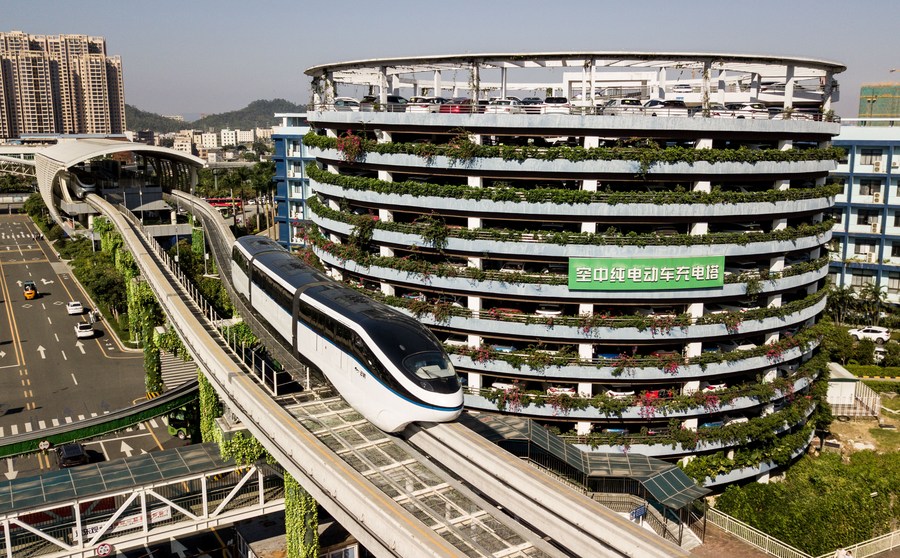 China is becoming less reliant on coal, with the proportion of coal consumption declining significantly to address pollution and climate change caused by fossil-fuel combustion.

China has over-fulfilled its target for cutting coal output capacity, eliminating more than 45 million kW of outdated coal and electricity output capacity during the 2016-2020 period.

For example, Shanxi Province, one of China's major coal-producing regions, will see the installed capacity of new and clean energy reach half of its total, with one-third of its electricity generated by new and clean energy by 2025. By the end of 2020, the installed capacity of new and renewable energy power generation reached 35.7 million kW, accounting for 34.38 percent of the province's total.

In Yulin, a coal-rich city in northwest China's Shaanxi Province, a chemical plant has been exploring its own form of green transition.

"The coal chemical industry should boost its green transition and seek the high-end and differentiated development of its industrial chains to make eco-friendly products in line with the market demand," said Zhang Xiansong, chairman of CNH Energy Yulin Chemical Co., Ltd.

Through the efficient use of coal, the company managed to produce green end-products including daily necessities, absorbable medical sutures and bone stents, as well as degradable materials.

The local chemical company mirrors the wider efforts made by the country to encourage local governments, industries and enterprises to explore low-carbon paths to development based on their individual conditions.

China's green endeavors have spanned various sectors, including construction, transport and the manufacturing of new-energy vehicles, receiving support from the finance sector and the carbon market.

In the transport sector, notable progress has also been made in building low-carbon urban transport systems. As of the end of 2020, 87 cities on China's mainland had joined the national program to improve public transport, and 43 cities had launched urban rail-transit networks. During the 2016-2020 period, the number of trips by urban public transport exceeded 427 billion, signifying a steady increase in the proportion of city dwellers using public transport. 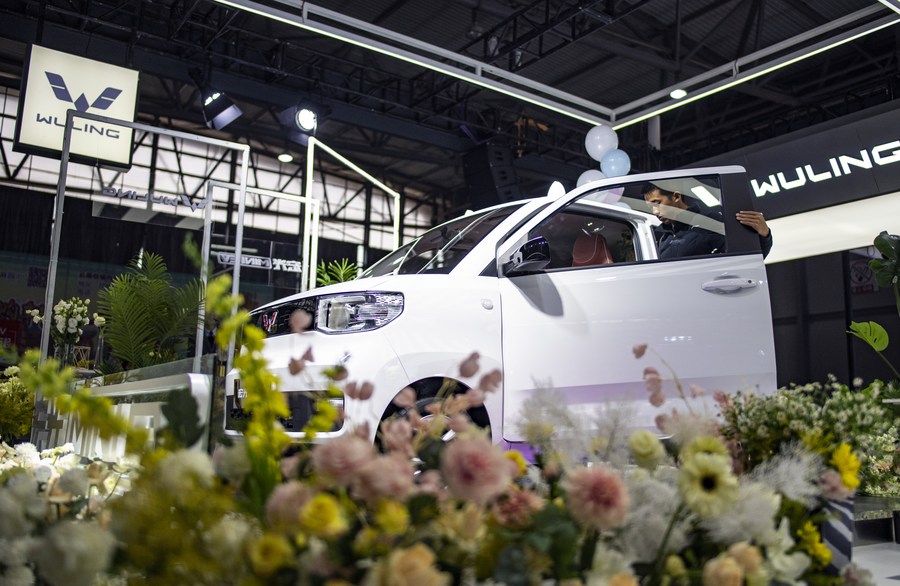 China has outpaced many other nations in the production and sale of new-energy vehicles for six straight years. It has also topped the world in the output of some major products for photovoltaic power generation over the past eight years.

In the finance sector, China has increased green-finance support and improved the top-level design of green finance. It has set up nine pilot zones for the reform and innovation of green finance in six provincial-level administrative units.

The carbon market provides an effective approach to managing the relationship between economic development and the reduction of carbon emissions. The national carbon emissions trading market is a major institutional innovation that uses market mechanisms to control and reduce greenhouse gas emissions and promote green and low-carbon development.

Adapted from a novel of the same name, the movie tells a story of a series of adventures of the main characters to find out the truth surrounding a Buddha head from the Tang Dynasty (618-907). It earned over 40 million yuan (around 6.3 million U.S. dollars) on Saturday, accounting for nearly 40 percent of the day's total.。

The domestic comedy-suspense film "Be Somebody" ranked second on the box office chart, generating around 28.6 million yuan on Saturday.。

It was followed by romantic movie "Good Night Beijing," which pocketed about 8.9 million yuan on its second day of screening. Enditem。

BEIJING, Nov. 15 (Xinhua) -- The Chinese economy has maintained sound recovery as policies coordinating COVID-19 control and economic development have paid off, and short-term headwinds have begun to wane, official data showed on Monday.。

The country's major economic indices improved in October, with industrial production and retail sales reporting faster year-on-year growth than in September, according to the National Bureau of Statistics (NBS).。

"Major October indicators have been generally kept in a reasonable range, while efforts to adjust structures and ensure people's livelihoods have proved to be strong and effective," said NBS spokesperson Fu Linghui.。

He said that positive signs are emerging in industrial production, as factors constraining the sector in the third quarter such as floods and the COVID-19 epidemic have eased since October.。

The job market has also been stable. China's surveyed urban unemployment rate stood at 4.9 percent in October, 0.4 percentage points lower than in the same period last year, according to the NBS.。

During the first 10 months of this year, the country created 11.33 million new jobs in its urban areas, achieving its whole-year target in advance.。

Fu said the trend of sustained recovery has remained unchanged while positive factors are accumulating, but cautioned that there are still international uncertainties, restraints on domestic recovery and rising pressures on corporate costs.。

Fu said there seemed to be some signs of stagflation due to the pandemic, natural disasters, international commodity price hikes and tightening supplies of raw materials, and that they have been caused by short-term factors and the situation will be temporary.。

Efforts to ensure supplies and stabilize prices are increasing, and tight supplies of certain energy products are easing, he said, expecting consumer inflation to remain mild.。

Power generation was 639.3 billion kilowatt-hours in October, up 3 percent year on year, according to the NBS.。

Responding to concerns over the recent sporadic resurgences of COVID-19, Fu said that with the extensive experience gained from past COVID-19 control work, China has relatively good conditions and fundamentals to contain the pandemic and will gradually reduce its impact on the economy.。

"Despite certain risks and challenges, China's economic operations are overall stable, and the improving trend in development quality is likely to be sustained," said Fu, looking to the next stage. Enditem。

The number of children hospitalized with COVID-19 in the United States has hit record high due to the Omicron-fueled surge.。

During the week of December 22-28, an average of 378 children aged 17 and under were admitted per day to hospitals, up by 66.1 percent from the week before, according to data updated by the US Centers for Disease Control and Prevention (CDC) on Thursday.。

It has set a new record for child hospitalizations with COVID-19 since the onset of the pandemic in the country.。

So far, over 7.5 million children have tested positive for COVID-19 in the United States, representing one in 10 American children, according to a latest report of the American Academy of Pediatrics and the Children's Hospital Association.。

COVID-19 cases among US children are "extremely high and increasing", according to the report.。

It has been three consecutive days that daily COVID-19 cases in the United States hit nearly half a million, according to data updated on the CDC website on Thursday.。

More than 486,000 new cases were reported nationwide on Wednesday, the highest daily count of any country worldwide during the pandemic.。